Review of “The End of Men”

Full disclaimer: I am a man. In this cultural and political climate, you might be wondering why you should even consider reading a book review by a man when the book itself is titled “The End of Men.” 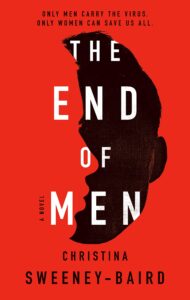 Honestly, when I preordered this book, written by Christina Sweeney-Baird, I thought for sure it would be a narrative that promoted an anti-man agenda where women ruled the Earth seeking to topple the oppressive patriarchy, and by doing so they made the world a better place simply because men were no longer in charge.

First off, understand that I grew up with two older sisters, one younger sister, and a mother that worked hard to provide for our family. I have no qualms about females being in power. However, I have a problem when narratives are twisted by real-world agendas to the point that the story just doesn’t make sense.

However, I was pleasantly surprised that her book wasn’t what I expected it to be. The End of Men is a book that asks what would the world be like if 90 percent of all men died from a deadly pandemic. That pandemic is told through first-hand experiences from several women and a few men. If you’ve ever read Max Brooks’ “World War Z”, it’s sort of like that except that instead of zombies it’s a plague.

With a world full of possible locations to settle on, the author decides to settle on While there are a few accounts that take place in different countries, the main locations for the book include various ares of the United Kingdom, Toronto, Canada, the Independent Republic of Scotland, and Singapore. There is a few accounts from America, but those are mostly from newspaper articles written by a female journalist.

For the most part, the accounts detail the lives of women as they wait to see if their husbands, brothers, sons, and male friends die. To make things worse, females are carriers for the disease so they can’t really safely be in contact around them. One in ten men are immune to the disease so there’s a little hope for the human race. The variety of professions for the characters span from scientists, journalists, anthropologists, and normal nine to five people.

Sweeney-Baird crafts an intriguing story, separating the pandemic into different stages. With each chapter, time passes and she lists how many days have passed since patient zero first died.

One of the only things that I felt wasn’t properly handled was the actual outbreak. Having lived through an actual worldwide pandemic that changed everything, I think that the way the Male Plague broke out was too simple and took too long for the world to accept. Without giving anything away, it starts in Scotland and takes a bit before the world reacts to it. If you look at the real world pandemic, things started in China and spread out from there. For the most part, the real world took the coronavirus seriously. Borders closed, people stayed in their homes, and we followed safety protocols. Again, for the most part. With the Male Plague being deadlier than the COVID-19, it would reason that the world would’ve taken the fictional plague in a more serious light. It states in the discussion guide in the back of the book that Sweeney-Baird wrote The End of Men a year before the COVID-19 outbreak. While it’s interesting that there are parallels between the Male Plague and COVID-19, I really think that the book could’ve used a bit of revision in the beginning in light of the real world’s pandemic origins.

Sweeney-Baird sparks an interesting question in terms of gender equality. In an Insider article written a little over a year ago, it lists ten professions that men dominate more than women. These stats are for the United States:

• 19 percent of software developers are women

• 9.9 percent of the construction industry are women

• 5.2 percent of aircraft pilots and flight engineers are women

Now, in a pandemic I grant you that you’re not going to be flying much so aviation careers might not be sought after. However, when 76 percent of all the farmers in the United States suddenly die, that’s going to cripple the country. During the recovery section of her book, Sweeney-Baird does a pretty decent job detailing some of the struggles of how women handle these questions.

She does lack in some areas, like religion for example. She briefly touched on issues like transgender and what experiences the surviving men have once women now dominate in numbers. Overall, I enjoyed reading The End of Men by Christina Sweeney-Baird. It tells a story of worldwide heartbreak, chaos, and eventual stability. In a world where we’re currently trying to come out on top against a similar pandemic, it’s nice to read a tale like hers.

Geek Out
0
Geek Out

WOW
0
WOW
A natural born reader, James tackled the works of Stephen King and Michael Crichton when he was in the sixth grade. His influential young mind, now twisted by the science fiction and horror genre, James did what any respectable young man would. He began crafting stories. Instead of playing in recess, James would write stories about dinosaurs and serial killers. He hasn’t stopped writing or reading which is where his path crossed with Burning Willow Press, LLC. Ironically enough, you can find James’s first published work, “The Dark Forest,” in the anthology “Crossroads in the Dark II: Urban Legends” published by Burning Willow Press. His first book, “The Book of Roland” published Feb. 25, 2017, is a 2017 Summer Indie Book Award nominee. It is the first of seven in the Soul Eater Chronicles and it is centered around a katana wielding, gunslinging, pop culture referencing monk named Timothy as he fights the incarnations of the Seven Deadly Sins. His next book, “The Book of Mark”, is scheduled to come out early 2018. James graduated from Indiana University South Bend with a Bachelor’s degree in English and a Minor in Film Studies in 2015. By day, James works as a mild-mannered reporter for The Pilot News as well as an editor for the weekly paper The News-Mirror. By night, he works for BWP reading submissions or writing his own works.

This website uses cookies to improve your experience while you navigate through the website. Out of these cookies, the cookies that are categorized as necessary are stored on your browser as they are as essential for the working of basic functionalities of the website. We also use third-party cookies that help us analyze and understand how you use this website. These cookies will be stored in your browser only with your consent. You also have the option to opt-out of these cookies. But opting out of some of these cookies may have an effect on your browsing experience.
Necessary Always Enabled
Necessary cookies are absolutely essential for the website to function properly. This category only includes cookies that ensures basic functionalities and security features of the website. These cookies do not store any personal information.
SAVE & ACCEPT
Choose A Format
Personality quiz
Series of questions that intends to reveal something about the personality
Trivia quiz
Series of questions with right and wrong answers that intends to check knowledge
Poll
Voting to make decisions or determine opinions
Story
Formatted Text with Embeds and Visuals
List
The Classic Internet Listicles
Countdown
The Classic Internet Countdowns
Open List
Submit your own item and vote up for the best submission
Ranked List
Upvote or downvote to decide the best list item
Meme
Upload your own images to make custom memes
Video
Youtube and Vimeo Embeds
Audio
Soundcloud or Mixcloud Embeds
Image
Photo or GIF
Gif
GIF format

Send this to a friend